Reflecting On A Week With Glass

It’s been exactly one week since picking up Glass at the Google Garage in Mountain View, CA. You flash your email confirmation, meet your personal Glass Guide (my terminology), and are asked if you’d like a mimosa, champagne, juice, or water. I didn’t at first, but after the second person came by and asked, I decided to have some juice. Not just any juice… organic local juice of course. Probably pressed on Google’s campus. This was like the geek’s version of DryBar (if you’re into that go somewhere to get your hair blow-dried phenomenon, I’ve heard it’s the best).

After receiving a drink, you are shown all the five colors of Glass and can try on each one to make sure you have the right one for your style. I chose white… err, Cloud, as if I’m going to be experimenting with this new technology I’d rather not look like I’m trying to be a secret agent. It’s not as jarring as the blue or orange, but does prominently announce itself.

The unboxing. As my guide Rachel said, it’s such a built-up moment that there should’ve been some dramatic music playing in the background. For the price of it, perhaps there should’ve been a live quartet playing. Also, as much as it’s great that there is someone there to walk you through the fitting and configuration of Glass, it’s actually more awkward than helpful. Perhaps they should ask if you’d like support, but then it wouldn’t take on this prestigious aura they are going for in this Explorer program.

Rather than walk you through the next 168 hours (I know you want to!) I’ve decided to break my reflection into some key areas that I’ve been thinking about while wearing (and not wearing) Glass for the past week.

With Glass, there a lot of information easily accessible at all times. I could quickly tap the Glass touchpad to see the latest tweets from my wife, @JennaWachtel, and any mentions of myself, @Pronovost. I had breaking news updates, e-mail, and current NBA scores.

Yet the more I had access to, the less I found myself wanting access to all of it. That’s actually the most surprising thing for myself and I believe for everyone else I talk to about Glass. Yes, it’s all there. And I find myself taking off Glass more and more, ignoring alerts, and actually touching all of my portable technology less. Even my phone, which Jenna had to help support me to separate myself from in social situations a few years ago.

Yes, that’s Jenna and me. No, I’m not wearing Glass.

Maybe it’s the mindfulness I’m practicing. Maybe it’s the terrible driving I see all around me when the driver’s head is looking down at a bright screen. Maybe it’s the fact I can get any question answered in just a few seconds, but Glass has helped me disengage with technology and engage even more with the people and scenery around me.

Before I go any further, don’t let the last two paragraphs make you think I’m disappointed in what Glass can do or think it’s not a quality product. Far from it. But as I preach not using technology for technology’s sake in the classroom, I believe that also holds true in our personal lives. 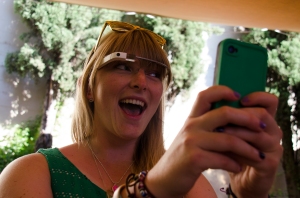 One of the coolest features of Glass? I can take a photo or video within a second or two, without turning taking anything out of my pocket, a bag, or even holding something in my hands. I wanted to show my newly decorated office to Jenna, but she couldn’t come by. So I held down the camera button on the top right side of the Glass frame and looked around the whole room.

A colleague wanted my opinion on a new website. Rather than view it, make notes, call him up and share those thoughts, I just took a video of my first interaction with the site. Glass followed where I was looking, which was great for me, although my colleague did say he thinks there needs to be a bit of a stabilizer on for the camera. (YouTube does offer to stabilize your video, but I wanted to get my thoughts to him as quickly as I could.)

I did have to take a few shots whenever I wanted to keep any artistry to my photos, as you’ll see in the two photos below. While I like the photo of my sister- and brother-in-law, I had to get right up in their personal space to capture that photo. And you thought it was awkward when someone put their phone in your way to try to capture the shot just right.

Jake and Molly through Glass

Up Close And Personal

Yes, capturing that photo just right means some strange maneuvers with your whole body. Right now, others don’t seem to mind, because Glass is such a novel tool and they often hope that they can try it on. But generally, I don’t find getting up in someone’s face to snap a photo is very appropriate.

Neither is wearing Glass everywhere. I know there are famous techies out there who think it’s completely fine to wear Glass all day, including in the shower. But why? If it played music for me in the shower, maybe. But again, back to engaging with our environment… do we really need access to Twitter in the shower?

As well as business meetings. Every time I’ve entered a meeting in the past week, I’ve taken Glass off. I tried to sit with it on for a little bit in one meeting but just couldn’t do it. There is no reason I need to make the person I’m meeting with feel like I might be engaging with Glass rather than them or like I might snap a photo and share it virally. Yes, I could easily look up whatever we are talking about. But as I’ve learned in the past few years, that actually disengages you from the conversation. Not knowing everything is what makes our conversations lively. Yes, that person might be wrong about the year that the Blazers drafted Sam Bowie – given it’s the year I was born and the biggest mistake of my favorite basketball team, I know it pretty well – but I don’t need to look it up and prove it to that person now. Unless we’re betting on it. Are we?

In the car. On a walk. Sitting in the office. Again, most of those situations don’t require Glass. In fact, it’s a bit of a distraction. But, who knows, I might change my mind once I experience wearing Glass walking the busy streets of New York. Doubtful though.

Also, while I personally know that I have to talk to Glass or touch the touchpad on the right side to engage with Glass, others don’t know that. They don’t know if you are here with them or you’re off in Facebook-land. And that makes building relationships even more difficult.

Back to a big highlight of Glass. Google Now cards, which allows Google to provide you with the information it determines you’d like, based on your recent searches and emails. Perhaps a little creepy, but the fact that Glass told me the status of my flight to ISTE and even told me the current temperature in San Antonio was quite nice. As well as seeing the latest Giants and NBA Finals scores without even needing to search. That made getting to my gate today much simpler.

Addendum: Google Now also knew the address of the hotel I was staying at as well as how long it would take to get there in current traffic. Now, the cab driver also knew that stuff, but sometimes that confirmation can be reassuring.

Effects On Your Eyes 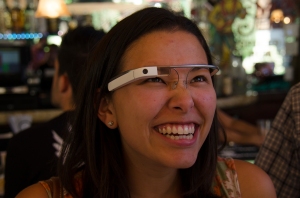 On the first day, my eyes definitely hurt from the strain of looking up-and-right more than I ever had in my life. On day seven, I can’t say it feels a whole lot better. Not to mention the fact that I feel the ghost of a box above my right eye even when Glass isn’t on my head. As much as the videos show someone looking at Glass and riding their bike or walking down the street, I can’t say I’ve enjoyed that a lot. It’s great for quick access, but you do disengage with your environment, missing steps or having to readjust the direction you thought you were walking. I’d much rather have an image directly in front of my eye if I wanted it (but only when I wanted it), like any of the robotic super-heroes (or anti-heroes) in all those action movies. 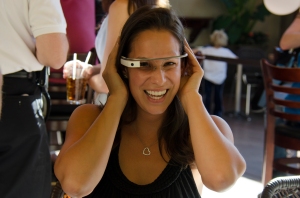 Talking to someone through Glass often is a difficult process. Everyone I’ve talked to has said it sounds like I’m riding a bike while I’m talking to them (even when I’m sitting on a bench). I’ve also had to plug my ears (at least my right one) to really hear what the other person is saying. No volume adjustments as well, so what you hear is what you get.

Ready For The Classroom?

As exciting as Google Glass is, odds are my Glass will be back in Google’s hands before I even have the chance to try it out in the classroom. The possibility of having your students feel like you’d rather be online than with them? The photos and videos that could accidentally be shared? (My wife Jenna has received numerous accidental emails from those who have tried on my Glass.) Not to mention eyestrain. And that’s all when thinking about an educator wearing Glass, not even the students.

One of a few dozen accidental shots I’ve taken by laying Glass upside down.

For the same price, I could return Glass and purchase five Samsung Chromebooks for a classroom. I’m not saying that one product could do what the either could, but when thinking about technology for a purpose, Glass isn’t yet worth the cost.

Rest easy, Technology and Human Resources departments. I won’t be testing how the board policies apply to Glass. Yet.

This entry was posted in EduGlass. Bookmark the permalink.

2 Responses to Reflecting On A Week With Glass