Can I Get A Retweet?

It’s been two weeks since my birthday, a day that went much better than ever hoped. I spent the afternoon with friends and family at a nearby park, enjoying good food and company. The highlight of the picnic was a touch football game that featured too many bare feet and dressy shoes.

While the game was going, I had a social experiment running on Twitter. I had just read Twitter correspondence becoming the autograph of the 21st century thanks to a tweet from @larryferlazzo. I decided my birthday was the perfect occasion to ask for a retweet. But rather than just ask for a RT, I asked for a picture of that celebrity holding their favorite book. I asked nearly 40 celebrities on twitter, ranging from children’s book authors to tv stars to athletes, expecting perhaps one reply (but hoping for more).

Turns out, I got a few responses, mostly from the education folks. Each one made my day a little brighter, but that wasn’t the end of the story.

EdTech Hulk and Michele Dufresne were both nice birthday greetings to receive, especially since my teaching colleagues and I love the Bella And Rosie books. Candice Wiggins even replied with the name of her favorite book, Ender’s Game. I’ve read her tweets about it before, but perhaps I’ll have to check it out now that it came in a birthday greeting.

Now, Peter H Reynolds. He went above and beyond. I’ve heard about his kindness before, I’ve met him in person and had a great conversation, but I definitely did not expect an offer of an original piece of art. But, who am I to turn down my class’s favorite author’s offer? I, of course, obliged and continued on the week, off to the annual CUE Conference and forgetting about the offer. Seriously, who would expect for something like that to actually happen?

Well, I came home from CUE (another post in itself) and apparently the woman who delivers my mail didn’t realize what was in the mail, because everything was a bit crammed in the tiny box, but I pulled it out and discovered… 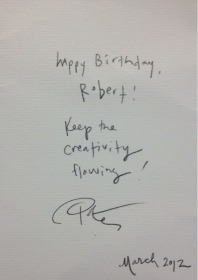 …one of the best birthday cards I’ve ever seen! Relating back to my original tweet, I have to believe that paper in the character’s hand must be the beginning of his own book, which of course would be anyone’s favorite book. This card is going to sit nicely next to our The Dot-inspired art. 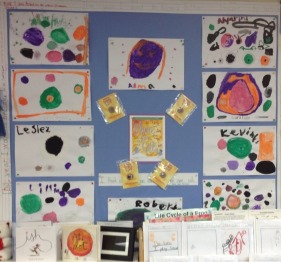 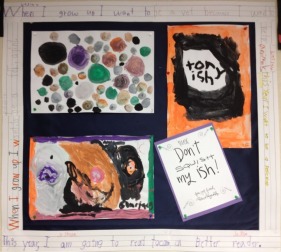 Thank you, Peter, for everything you do to inspire us every day!